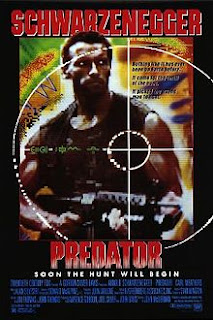 It was the best of times; it was the worst of times.  We were in the thick of MONSTER SQUAD, when we began to see new drawings from Stan of a new alien character for the film PREDATOR.  The makeup effects community in the 80's, although expansive, was still drawing from a common talent pool, so friends were always talking despite many studios' insistence on secrecy.

Most of us had heard of PREDATOR, when it was floating around shops as a script entitled HUNTER.  We also were aware that Steve Johnson's crew at Richard Edland's BOSS Film Effects had built a version of the suit and had already executed many of the gore effects for the film.  So, why had the producers shown up at Stan's?  It was very confusing, but an important lesson that I learned about film making:  Films are made in post production.

Trust me, I wish it weren't that way, but it is true.  Shooting a film on set is necessary for gathering the material that you need to make a movie, and the better quality shots and assets, the better the movie.  However, until it is all put together, there is really no picture.  The reason I say I wish it weren't true, is because so many people "kill" themselves on set working their behinds off to make production days and furnish these incredible shots.  AND, that's why a mediocre film can be elevated if  a director is shrewd enough to shoot, shoot, shoot, shoot so that the editors have a lot of options to cut.  There is an expression that many good performances by actors have been constructed by film editors.  There is a lot of truth in that.

With the the stories about the perceived failure of the BOSS Films Predator floating around the shops, PREDATOR had now found its new home at Stan Winston Studios.  From my perspective, the only place where the BOSS crew went wrong (and by that, I mean, where production went wrong since they had to approve the design process every step of the way) was that they were way ahead of their time.  Their concept exceeded the contemporary effects technology where it came to leg extensions.

Requiring a crane to hold the creature up on it's spindly alien legs severely affected the shooting schedule and was too limiting for director, John McTiernan, to constantly frame out.  It is commonly known that action star, John Claude Van Damme was the performer in the suit; he had taken the job because he thought that his debut in motion pictures as Arnold Schwarzenegger's adversary would skyrocket him to stardom.  He didn't understand that no one would ever see his face or body on screen and subsequently, he left the show when the BOSS Films Predator left the show.

What is ironic is that among the artists who worked at BOSS on that incarnation of PREDATOR was STEVE WANG!!!   Fate truly had cursed him to be such an integral part of the show.

I've written a history of the Stan Winston Studios, PREDATOR design history for my column at Film School Rejects here: Predator Design Story and I really don't have much to add to it beyond saying that until all of the parties get together in one room, we'll never know the complete story and the bottom line is that the Predator was the result of an army of talented people who threw themselves into the project with an enviable sense of dedication.  So, let's talk a little about how it all practically happened.  I'm going to assume that you've read the article that I've linked to, but if not, don't worry, the story can continue.

Kevin Peter Hall was the first important component of the show. He had already portrayed an alien hunter designed by Rick Baker and applied by Greg Cannom in WITHOUT WARNING and he was fresh off of a very pleasant experience as the titular Sasquatch character in HARRY AND THE HENDERSONS.


Kevin was an actor by trade, not a suit performer.  Having been trained in improvisational comedy, Kevin and a partner were frequently on stage in Hollywood comedy clubs.  Prior to his gig on HARRY AND THE HENDERSONS, Kevin had acted in a short-lived television series entitled MISFITS OF SCIENCE where e played a character that despite his impressive stature, could physically shrink down to tiny proportions (Ah, television writers!  How clever can they get?!  I can hear the enthusiastic guffawing and self-congratulations at that one-joke concept). What made Kevin such a great candidate to play the Predator was not just that he was a good actor, but his patience knew no end.

We were kids, literally.  Steve Wang and Matt Rose weren't even 21 year old at the time.  I was 24.  No matter what we asked of Kevin during the construction he was only too glad to help.  He wanted to collaborate on this character and was in awe of the work being done at the studio.  And, of course, he LOVED interacting with Stan Winston.

Stan, a natural performer, and Kevin would launch into silliness every time Kevin visited the studio.  Ah, the glory days. After being hired, Kevin had come to the studio and posed for photographs for the design maquette, however because of the studio's continuing obligation to MONSTER SQUAD and the time required to get a design concept approved by the PREDATOR production, we didn't see Kevin for a few weeks.

By the time Kevin came back to the shop the second time, sculptor, Wayne Strong's maquette was completed and Matt Rose and Steve Wang were back from their Gillman duties from MONSTER SQUAD.  Steve had done three drawings of the Predator, one head study, one full body standing drawing, and one of the character running toward the viewer.  But before any artwork could begin, we needed to cast Kevin Peter Hall.

As anyone in makeup effects can tell you, life casting is the foundation of any prosthetic or creature suit and there are many steps that have to take place prior to sculpting.  In Kevin's case, since he was so tall (yes, he was 7 foot, 2 inches tall) that we needed to do his body cast as two, two piece molds - his upper torso, and his hips and legs.  When the plaster bandage mold was completed (remember, no body scanning and outputting then...had to do it all by hand!), rigid foam was poured around a pipe armature.

A drill bit was taped off at 1/4" (meaning only a 1/4 inch of the bit was exposed and able to drill) and the entire surface of the rigid foam was marked with these 1/4" pits.  Then, the entire surface was sanded down until none of the pits was visible, effectively removing 1/4" of material from all over the rigid foam casting.  This was done for a couple of reasons: 1.) it ensured a great fit for the suit.  The tighter the suit, the less wrinkling and bagginess there would be and 2.) rigid foam, even when poured into a mold, expands a bit more once it is released from the mold.  When the form was sanded, it was sealed and another, heartier plaster bandage mold was made so that a fiberglass body form could be run for sculpting and foam latex casting.

Kevin's head, hands, and feet were cast in prosthetic grade cream and positives were poured and remolded in silicone for masters, sculpting and running cores.  While all of this lab work was being done, Steve, Matt and Stan spent time figuring out a strategy to get the first leg of work completed.  As had been established on MONSTER SQUAD, Matt would sculpt the head, Steve would concentrate on the body.  Unfortunately, due to the time constraints, it was decided that the armor pieces, with the exception of the helmet, the backpack and the wrist units, would be sculpted on the body and become permanent pieces rather than sculpting a nude predator and having to work out the armor later.  There just wasn't the time.

As with the Gillman, it was decided that the Predator would have long fingers, so prior to the glove being sculpted, finger extension cups were sculpted, molded, cast and then put onto Kevin Peter Hall's hand casts.
Meanwhile, MONSTER SQUAD had wrapped and the very fatigued group of Stan Winston's lifers came back to the shop.  They spent time carefully storing and displaying the suit pieces and prosthetics while we PREDATOR-kids tore up the shop in frenetic activity.

Perception is a tricky thing.

It is difficult for any of us to be able to stand in another individual's shoes and be able to experience situations from a different point of view.  For this story, the "why's" become less important and in an effort to elevate and celebrate the efforts of the Stan Winston crew, let's just stick to the facts.

When most of the sculpting forms were completed, Matt Rose began work on the Predator's head.  Steve Wang began the body sculpture, assisted by Alec Gillis, Shane Mahan and I (although, I would admit that aside from roughing forms out, I take no credit for the finished sculpt at all).  John Rosengrant began roughing in the Predator's feet and Tom Woodruff, Jr. began sculpting the wrist-blade housing.  By this time it was mid-Autumn and it was clear that everyone was physically pushing themselves in the wake of non-stop work since the "Go to the Head of the Class" episode of AMAZING STORIES.

The responsibility of creating the Predator created substantial pressure on Steve Wang.  With such a quick schedule, the body sculpture would have to be completed first and at a record pace.  Steve told Stan he was concerned that the sculpture would not be as refined as he had hoped to which Stan told Steve that the Predator suit was going to be all about the paint job.  How right Stan was.

Steve Wang reminded me that he fell ill toward the end of the Predator body sculpt (I couldn't swear on it, but I would bet stress and fatigue contributed to Steve's sickness).  I had been off of the sculpture turning my attention to other duties. In Steve's absence, John and Shane finished off the Predator body sculpture; Shane added the chevron details to the armor, as I recall.  However, whether it was fatigue, or budget, or the impending pre-production of Stan's directorial debut, PUMPKINHEAD, whatever the reason, John, Shane, Tom and Alec took some time off.

Shortly after, one day after work, Stan pulled me aside in the parking lot.  He told me that he wanted me to "watch Predator" for him (which meant, act as a supervisor/facilitator).  He went on to explain that Matt and Steve would be the last word on anything creative or artistic (naturally!) but that it would be my duty to figure out how everything was going to get done.  And if it didn't get done...it would be my ass (yes, he literally said that).

Mold maker, Steve Patino, showed up at the studio to make a fiberglass mold of the body sculpture.  The Predator crew had been slowly building as other Stan Winston studio employees finished up on MONSTER SQUAD including Grant Arndt, Lindsay McGowan, and Emilio Gonzales.  Mechanic, Wayne Strong, joined Richard Landon and Dave Kindlon in the mechanical department, to build custom air rams to extend and retract the wrist blades.


With everyone now working at break neck speed, the Predator body mold was opened only to reveal a network of thin, spiderweb-like cracks that ran the entire length.  We had no choice but to run it the way it came out.

END OF PART 1.  NEXT TIME - The pressure mounts as the crew attempts to finish the Predator.  Oh, and by the way, we'll need a red suit for the Visual Effects department!

Love in the Time of Chasmosaurs